2 Weeks with the Macbook Air 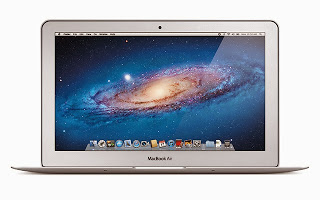 After months of waiting for the Ivy Bridge refresh of all of the Mac Laptops, I was finally able to order a new workstation: an 11" Macbook Pro. It's such a radical departure for me.

I've owned a Mac before as my workstation, but it was a big hinkin' G5 PowerMac. It was a great machine for the time, but it aged poorly. As the Apple switched from the PowerPC architecture to Intel x86, more and more software wouldn't work on it. Then I got married, went on an expensive honeymoon, and had a kid in a short period. So buying another Mac didn't seem like a great option. I hobbled together a new Linux PC with $400 worth of parts. It got the job done, but the annoying situation with sound drivers and the like that plague Linux systems was just more than I wanted to deal with. That, combined with the fact that I got a smartphone, they got me an iPad at work, I started working more hours, and travelling more, and had a wonderful young child that needed spending time with, meant that I spent less and less time on my PC. What I needed from a workstation was a laptop.

I'd owned laptops before. I have a crappy old Dell laptop running Ubuntu. It did OK. But it was a beast. It was a 15" model with a big but slow hard drive. It weighed like 9 lbs. I did actually wind up using it more than my desktop, because I could use it anywhere. Well,  anywhere I had a lot of space and a power outlet. It got virtually zero battery life (less than an hour with light use), and the slow hard drive made it somewhat annoying to use. The trackpad was a basic one, barely usable, so I always had to use a mouse. So I didn't use it much. I did all my browsing and email on my phone and iPad by this point, largely because I could do that anywhere -- on the couch while my daughter was napping, in bed first thing in the morning, in line at the DMV, at one of those under-sized tables in Starbucks, etc.

And then I got my current job, which is much more of a management role. I'm in a LOT of meetings, and if I want to get any coding done, I need to be able to do it on the go. I now travel a bit more, and the bulky HP laptop I have as my temporary workstation is terrible. I got a Kindle Fire on which I installed CyanogenMod, and started bringing that to meetings for note taking. That was a perfectly OK solution, but I couldn't do much more than I could on my phone.

I decided a while ago that my next workstation would be a Macbook Air. But as I previously mentioned, I was waiting for the Ivy Bridge refresh because 4GB of RAM was too little for my needs. Lo and behold, a few weeks ago at WWDC, Apple announced they were refreshing all of their Macbooks to use Ivy Bridge, and all of the Air's could be upgraded to 8GB of RAM! So I ordered an 11" model, and it came in about 2 weeks ago. I was scared, though. It's the first machine I've ever ordered that wasn't upgradable. I couldn't even change the battery without resorting to extreme measures. Would 2 USB ports be enough? What about the tiny screen size? What about the crappy Intel on-board graphics?

2 weeks later, I still love it. It's faster for most things that aren't compiling large codebases and crazy Photoshop filters than my old desktop workstation. It gets great battery life -- between 4-5 hours. It's really snappy, and wakes from sleep in less than 3 seconds. It's super-light, and tiny enough that I take it to every meeting and pretty much everywhere I go without cramping my style. I get real development work done on it. I've used it, tethered to my phone, to make emergency fixes on the train and bus.

It's also changed my usage patterns. I never pick up my iPad or Kindle Fire any more. The only thing it doesn't replace them for is Netflix streaming, because Microsoft's Silverlight plugin consistently crashes, locks up the system, and requires a reinstall of the plugin every time I use it (launching Netflix in Firefox, Chrome, and Safari yield the same results). I use my phone a bit less too, as I always have the Air with me, so I use it when appropriate. The near instant wake from sleep is honestly the biggest feature of the device. If I have 5 minutes to bang out an email or write a snippet of code, I can.

Most surprisingly to me, I've rarely plugged in a mouse to it. I've never owned a device that had a non-shitty trackpad before. People who know me know that I'm a keyboard and mouse snob. When I do station the thing at my desk, I hook it up to an old IBM Model-M style buckling-spring keyboard, and a fairly high-end (if old) Logitech optical mouse, and a 24" Dell IPS display. It's really nice when I can do that. But the built-in keyboard and trackpad are, dare I say, acceptable? That's really high praise from me. Yes, I prefer mechanical keyswitches with a LOT more travel, and a full-sized, heavy, wired optical mouse to a trackpad—those are objectively superior input devices—but I can do just fine in extended sessions with the built in stuff on the Air.

There's a lot to love about the Air—it's attractive, fast, convenient, thin, light, and portable. I'm happy to be rid of the optical drive. I'm hopeful that Thunderbolt peripherals will start to fill the marketplace. I'm desperately hoping that within a year or two my battery won't be useless, and when it finally does start dying, I can have it replaced. The price was a little more than I wanted to pay for it—I build a desktop Linux machine with the same specs for about a third the cost. But, honestly, the PC manufacturers can't make a similar device of similar quality at a similar cost, so I don't feel Apple is ripping me off. And OS X is nice. There's a bit I miss from Linux, but not a whole lot. Oh, and both Finder and the Dock suck, but that's always been the case.